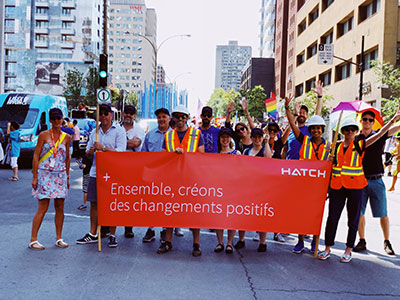 With a mission to support and promote local communities while serving as a beacon of hope for people around the world who continue to battle injustice, the Montreal Pride Festival attracts nearly 2.7 million local and international visitors for eleven days of community and cultural activities each year. And this year colleagues from Hatch’s Montreal office stood together to take part.

"As an organization, we want everyone—no matter their gender, ethnicity, race, sexual orientation, disability, or even way of thinking—to be able to reach their full potential,” said Jean-Francois Vigneault, piping engineer and one of Hatch’s regional Diversity and Inclusion committee leads. “We're working hard to build an environment where being who you truly are is celebrated. It was wonderful to see Hatch support Pride month this year, and to see as our employees joined together in Montreal to demonstrate our commitment to positive change."

"On August 19, we walked alongside other like-minded Canadian organizations and individuals to celebrate our Pride," continued Jean-Francois. "Not only was our Prime Minister, Justin Trudeau, in attendance, but companies such as Air Canada, Pepsi, all the major Canadian banking institutions, and members of municipal, provincial, and federal governments took part. I was proud to wave the Hatch flag alongside such prominent companies."