National Day for Truth and Reconciliation: Healing wounds of the past

On September 30 of each year, Canadians observe both National Day for Truth and Reconciliation and Orange Shirt Day, to commemorate the plight of Indigenous children who attended the nation’s residential schools between the mid-1800s and 1996.

For me, as an Indigenous person, it is a time to reflect and heal.

Residential schools were funded and operated by the government in partnership with several religious groups, including Roman Catholic, Anglican, Methodist and Presbyterian churches, to convert Indigenous children to Christianity and force them to abandon their own culture and assimilate into Canadian society. It is estimated over 150,000 children were taken from their families and placed in residential boarding schools. There, they were forced to cut their hair and banned from speaking their language, they were abused physically, spiritually and mentally. Sadly, many never returned home. An estimated 6,000 died from diseases and other causes while at the schools. Records were not kept or were destroyed so it is difficult to find an accurate number and unmarked graves continue to be recovered.

Back then, Indian agents were prevalent in our communities. They would tell us what we could and couldn't do. They would come and take children from parents to attend residential schools. If you didn't give up your children, you could be put in jail, or they would withhold commodities. The local trading posts where you would shop for flour and sugar and whatnot wouldn’t serve you. That’s the power that Indian agents had over our people.

Some families took their children and ran off into the bush and hid. Others would hide their kids in cupboards and other places when the Indian agent would come around. Still others gave their children up thinking it would be better for them to integrate into the Canadian society. One such child, Phyllis Webstad recalled that as a 6-years-old she was stripped of her clothing on the first day of school, including a new bright orange shirt her grandmother had given her. She never saw it again. Webstad went on to write two children’s books, The Orange Shirt Story and Phyllis’s Orange Shirt, which led to the establishment of Orange Shirt Day in 2013.

A woman shared a story with me about how her mother took ink and a needle and placed a tattoo on her hand, like a dot, because she knew that if her daughter returned, she may not recognize her because she would be a different person. It’s mind blowing. There is a book titled Up Ghost River by Edmund Metatawabin and Alexandra Shimo, that revealed that one school built an electric chair that wouldn’t kill the children, but would shock them. And it was a jolt. It’s a very sad book. Ultimately residential schools were all part of a broader plan of genocide, trying to take the Indian out of the child and have them migrated into western society.

Every Indigenous person in Canada is a first, second, or third generation residential school survivor. I am second generation. My mom was Ojibway (O-jib-way), and my dad was German. When she married my dad, she lost her Indian status; she was enfranchised and lost her Aboriginal and treaty rights. The laws were very discriminatory back then. In 1985, Bill C-31 amended the Indian Act which was the first attempt to address the gender discrimination of the Act. My mom re-registered with her band and was reinstated. My mom was reserved, because of the generational trauma from my grandparents. My grandmother went to residential school, which I didn’t realize for the longest time. I was told she was an orphan and was raised by nuns. I don’t even know her true last name. My grandfather was a medicine man. People would come to him if they were sick and he would use plants, medicine from the land, to treat them. I used to think that my family didn’t suffer from the trauma of residential school, but they so did. We all did. I still carry that trauma; it’s in our genetics.

My mother-in-law, who has lived with our family for 25 years also went to residential school. She is very quiet and doesn’t complain. She is also very kind and has so much knowledge. She speaks Ojibway and has shared what she is comfortable with about our culture. I know more about our great natural law and sacred teachings because of her.

My people come from the land and my family lives in an Indigenous community, which keeps me grounded and allows me to live my life in a balance. Our home is on Mattagami Lake, which is interesting because as an Indigenous woman, I have a responsibility to water. It’s life-giving.

I was hired as Hatch’s Manager of Community Engagement on June 6, 2022, so I’m very new to the company. Before that I spent 14 years at Ontario Power Generation (OPG), where I helped develop and maintain relationships with Indigenous communities.

I wouldn’t work for Hatch if they didn’t hold similar values as me. When I was at OPG, we worked with Hatch on the Lower Mattagami River project. I remember Hatch’s people asking me questions about Indigenous communities local to the project. Hatch wanted to know their interests and culture and demonstrated its desire to work across industry and communities. That was more than two decades ago.

From what I’ve seen Indigenous communities respect the way Hatch does its job. Our Community Engagement Practice strives to understand a community’s connection to the land and its culture. And they do it because it’s the right thing to do.

On September 30, people all over Canada will be wearing Orange Shirts while observing National Day of Truth and Reconciliation. What I would like them to recognize is that Canada hasn’t done a good job acknowledging the true history inclusive to Indigenous people and that there are so many resources readily available that they can tap into. And I want them to recognize that Indigenous people need allies, which comes in so many different ways and forms. For example, they can support Indigenous businesses. There are a lot of indigenous businesses and, because we are a society where we can work and shop anywhere over the internet, we can work and support them. I also want people to understand that if you live in Canada, you’re probably living within a treaty. You’re living in a territory of a First Nation and there are resources to find out where those are.

Finally, I think parents should talk with their children about Canada’s history as it relates to Indigenous people. Ask them what they are learning in school. It’s important to learn math and English, but it’s also important to understand your country, its history, and the contributions and hardships that Indigenous people have endured. And one of those hardships was residential schools. 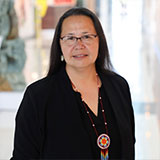 Sue Prince, Hatch’s Manager of Community Engagement, has 30 years of experience working with Indigenous people and communities. She and her husband – who is also Indigenous – have four children, three of whom are Two-Spirited or part of the LGBTQ2S community, which in Indigenous culture means they have a special relationship with the creator.