A Hot New Take on Depth of Frost Penetration

Predicting depth of frost penetration is an important consideration for most infrastructure, mining, and hydropower projects.

In layman’s terms, frost depth is the deepest point that soil moisture will freeze. It varies by location and the severity of the freezing season but must be calculated correctly to avoid issues such as ground heaving (moving) and foundation cracking.

There are many approaches for predicting frost penetration, which can be found in various publications, including the Canadian Foundation Engineering Manual (CFEM), 4th Edition. These methods have been used for years. However, having worked in the geotechnical consulting industry for over two decades, I have seen on numerous occasions discrepancies and/or nuances in the way the approaches are presented that could lead to flawed frost depth predictions and unnecessary costs. To get to the bottom of this, I recently completed a detailed review of one of the most widely used methods for predicting frost depth, the Modified Berggren Equation, and how it is applied in the industry.

My review prompted an analysis of the most common approaches to using the Modified Berggren Equation, most of which could lead to inaccurate frost depth estimates. This, in turn, could result in overdesign, which significantly impacts the cost of construction, or underdesign, which is avoidable and costly.

An assessment of 11 sites in the Canadian provinces of Newfoundland and Labrador – northern sites with below-freezing temperatures during winter – found that most of the approaches were unreliable. Additionally, the approaches did not consider return periods (the probability that a natural event of similar intensity will reoccur). It’s common for return periods to be used to estimate the occurrence probabilities of floods and earthquakes for design. But they must be properly understood and used correctly. For example, a 100-year flood refers to a significant event that infrequently occurs. However, it does not indicate that a flood only happens once every 100 years. Rather, it means that in any given year there is a one in 100 chance (one percent) of a flood of this magnitude occurring.

Assessing return periods using site-specific weather data is critical to determining the appropriate depth of frost penetration for a project site and, just as importantly, allows clients to make informed, decisions based on their tolerance of risk. Consider, for example, someone who wants to construct infrastructure with a high importance rating such as a bridge that is vital for the movement of goods and services. Obviously, the effects of frost heave could lead to foundation damage and, in turn, impact the operability of the bridge. The client would, therefore, most likely want to design a foundation based on a higher return period (e.g., one in 50-year or one in 100-year ), to lessen the risk of disruption to supply chains. In this case, the cost of calculating the return period would be minimal (a few thousand dollars) compared to the overall savings for the client (hundreds of thousands in foundation repair or migration costs). It would also benefit the public and improve the resiliency of the structure. And it’s not just infrastructure clients who would benefit. The return period approach can also be applied to other sectors, including mining and energy.

Adopting a different approach to solve a problem is often met with skepticism. Counter arguments often include, “We have always done it this way, so why change now?” or “Why worry about return periods when the impacts of climate change so far indicate that winter seasons (freezing periods) are shorter and average winter temperatures are decreasing?”

In response to the first argument, a positive change; particularly one that will help our clients complete successful, cost-effective projects across numerous sectors, should never be overlooked. In response to the second, the climate change argument is a moot point. While it is true that winters in northern climates are expected to get warmer, my analysis shows we will still experience extreme highs and lows similar to what we have seen in the past. So, assessing historical weather data to evaluate return periods has numerous advantages when estimating depth of frost penetration.

If you’d like more information, please reach out to us. Our new approach can help provide a strong, cost-effective and sustainable foundation for your next project.

For more information, read Andrew Peach’s paper that was presented at the GeoNiagara 2021 Conference in September: 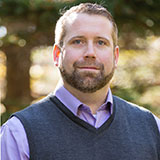 Andrew Peach has been providing engineering, geological, and environmental consulting services for hydroelectric, infrastructure, transportation, ports and terminals, and mining developments throughout Canada and internationally for over twenty-two (22) years. He has considerable experience leading multi-disciplinary teams and areas of specialization include dam safety, open pit mining, erosion and sediment control, and slope stability and geohazard assessments.