The potential of biomass as an alternative fuel source

In June 2019, the Federal Government of Canada published the output-based pricing system (OBPS) regulations to restrict GHG emissions for industrial producers. The regulations stipulate a clear permissible limit of GHGs based on the production capacity for all industrial sectors, including the power sector.

The permissible limit for producing electricity using solid fossil fuels (namely, coal) started at 800t/GWh in 2019, and then must gradually reduce to 370t/GWh by 2030. Similarly, any new electricity generation facility that produces 50 MW of electric power or more, and uses gaseous fuels (natural gas), has a permissible CO2 emission limit of 370t/GWh for 2021 and must drop to zero by 2030.1 Emissions above these limits are taxable.

This poses a financial restriction to the power sector in the production of electricity using fossil fuels unless power plants are equipped with a carbon capture and sequestration system (CCS). An alternative would be to explore renewable power options or use oxy fuel combustion. A more reliable option, however, can be to replace fossil fuels with biomass or use a mix of fossil fuel and biomass where possible.

Power producers looking for low carbon options can explore the potential of using biomass as an alternative fuel to supply relatively stable and reliable power to the grid. The federal OBPS regulations consider biomass a carbon-neutral fuel. If using both fossil fuel and biomass fuel for electricity production within one facility, the regulations offset the portion of CO2 emissions produced by burning biomass.1

Canada has over seventy biomass power plants of varying capacities with a total power output of over 2,400 MW. This is 1.7% of Canada’s total installed capacity. It can be inferred that with the new OBPS regulations provinces like Saskatchewan, with a production of around 10 million tons of grain straw every year,2 should start exploring the options of using biomass as a fuel to produce electricity while reducing their fossil fuel consumption and carbon tax exposure.

Figure 1: Production of Electricity using Biomass across the Globe 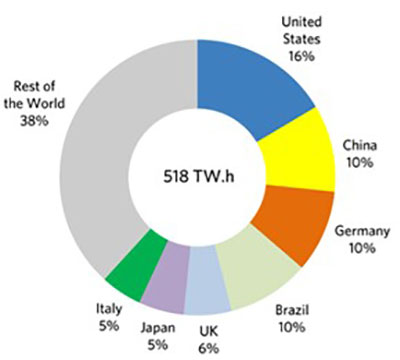 One of the challenges for using biomass as a primary fuel for electricity production is finding a continuous, reliable supply of fuel, especially if it’s coming from a seasonal crop. A sustainable fuel supply can be managed to some extent with storage, however, the volumes required during the off-season pose significant storage costs. This can be less challenging if future biomass-fueled steam generators are equipped with burners that allow burning of an alternate biomass fuel when the prime fuel source is not available.

Another challenge is the transportation of biomass to the power plant facility. The bulk density of biomass fuels is 10% to 40% less than fossil fuels, meaning that more volume is needed to produce the same amount of thermal heat. Additionally, biomass is transported using trucks, as the fuel sources are mostly located at a distance from rail or other low-cost transportation options. Transportation costs can be minimized by locating these plants nearer biomass fuel sources. To capitalize on the benefits of biomass, it’s important to locate biomass facilities in regions with ideal sources of fuel with good transportation and grid connections.

Other benefits of biomass include:

In summary, biomass has immense potential as an alternative fuel source to meet both electric and thermal power requirements and avoid being taxed on excessive emissions. Recent carbon tax regulations, like OBPS for example, will trigger and uncover this potential. 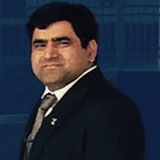 Kamran is a senior thermal engineer at Hatch, with more than fifteen years of experience in the power businesses. He has performed duties as a system design engineer, project manager, and technical expert for major power plant equipment manufacturers and has worked on several thermal & renewable power projects across the globe. As a thermal power professional, Kamran is always keen to help with addressing the world’s energy needs with minimal impact to the environment.