Building a positive legacy: how mines can create thriving towns

The world is experiencing unprecedented change at an accelerating pace, bringing volatility across many economic sectors demonstrated by cycles of boom and bust. The mining industry, like others, is not immune to such forces and continues to learn to adapt. We’re seeing increasing interest and a rising trend of businesses starting to prioritize social responsibility. When we look at communities immediately adjacent to mine sites, those communities often have their short-term success and long-term prosperity interwoven with that of the mine.

More than ever before corporations are aspiring to be forces of good in the world, eager to have a positive socio-economic impact. A combination of growing empathy for stakeholders and affected communities fighting for relevance has shone a spotlight on the need to create sustainable opportunities for the communities touched by the activities of mining. Notwithstanding the aspiration and willingness, there is a legacy of failed mining towns around the globe. Some have become ghost towns. Some have become populated with impoverished communities. Around the world, there are lessons to be learned on how to do better.

It’s not all tragic. There are contrasting examples of thriving global cities like Johannesburg which rose on the back of mining activities. Still considered an arrival city on the African continent, it’s the gateway to opportunity and economic liberation for many.

Looking to another sector for inspiration, the city of Sheffield in the United Kingdom reached peak levels of prosperity in the 1970s after being the birthplace of global steel production. However, by the 1980s it appeared as though Sheffield’s best years were behind it. A once thriving city was now characterized by mass unemployment and poverty, and in need of reinvention. It took economic acuity, vision, and creativity to transform Sheffield into the advanced manufacturing powerhouse it is today, where it is the research hub of brands like McLaren, Rolls-Royce, Siemens, and British Aerospace.

When we look back through history, it’s easy to get the impression that much of the success we see today was born out of incredible vision and meticulous planning. In reality, much of it was born out of a healthy dose of necessity. There was a late realization of the need to build cities that are unique and relevant for the time while being adaptable for the future. All success stories had to endure decades of hardship before revival and reinvention. This doesn’t have to be the case now. What can we learn from history and apply to today in order to create thriving mining towns?

Start with the end in mind to create an endless future

Mining towns are established organically or by design, either due to the immediate market or need created by the mine. Is it wise to allow or enable such a permanent or semi-permanent establishment? If so, the town needs to be guided by a vision of success beyond the life of the mine, even though it may have been the initial catalyst. Craft a compelling vision beyond just the opportunity of the moment. For example, having a vision for “exporting” goods and services that were initially tailored for the mine, brings market diversification, reducing dependency over time.

Translate that vision into a clear economic strategy

Beyond having a vision, having clear, actionable steps to diversify the local economy creates focus and identifies the required resources in advance of it becoming critical for survival. Such strategies also signal how dividends earned by the town during periods of growth should be reinvested for a more sustainable and durable economic future.

Towns need to evolve beyond being a source of labor for the mine. Thinking creatively about the mine supply chain can reveal opportunities to establish small local businesses that can not only supply the mine, but with time, other markets beyond the mine that initially created the need. This focus on creating shared value can break the cycle of dependence and deeply integrate communities into a larger economy.

Have focused leadership and custodianship

Creating thriving towns and cities starts with establishing an enabling environment that’s conducive for investment and the development of the right talent and entrepreneurs that in turn can help build out a diverse economy. Achieving all of this requires focused leadership and custodianship. Sheffield for instance established a Special Purpose Vehicle that was the driving force behind the region’s revival and transformation.

Both governments and mining companies deploy capital with various scales and timeframes to satisfy social need and mining operations, respectively. Often, greater impact can be achieved through harmonized programs. For example, a water supply program for a mine can be scaled up to also supply the local community. This can be more cost-efficient than creating two separate supply schemes. The savings from such optimization can in turn be spent on inter-alia entrepreneurship programs, schools, and health care.

Access to resources and affordability influence the township experience. Utilitarian township schemes, while better than what may have been there before, do little to build long-term affinity and create delight. Good design doesn’t have to come at a high cost. It’s important to adopt a human-centred approach towards creating towns that have identity, places for social interaction, places to learn, and places to explore. Crafting all these elements and more with input of the communities and stakeholders goes a long way toward creating affinity and civic pride, essential ingredients for success.

Mining towns may exist for many reasons. Regardless of the origin, it’s important for mining companies, governments, and communities to have a shared vision for the future. This is the starting point to establish actionable first steps towards positive change and creating towns that can thrive beyond the very thing that started their genesis. 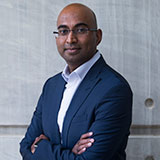 Jarendra focuses on solving the most difficult problems facing cities within the context of rapid urbanization, climate change, technology disruption, and socio-economic changes. A combination of a diverse background, significant experience in complex multidisciplinary projects, and a proven track record in helping expert teams unleash their full potential enables Jarendra to challenge conventional thinking and deliver high-impact results for clients.