Amidst so much global economic uncertainty, how are we to run our businesses? What should our focus be in the next six to twelve months, or the next two to five years? Many organizations are asking themselves these important questions, searching for a road map through the turbulence that might give the best chance of emerging on their feet once they reach the other side.

When faced with unknowns, it can be helpful to revisit the stories of others to remind ourselves what it is, exactly, that leads to the successes of some of the most well-known and long-lasting businesses of our era and what lessons may be relevant for our own organizations today.

Many success stories have been published about influential businesses over time. In Search of Excellence (1982) or Good to Great (2001) are two of the better-known classic compendiums. Yet many once-great companies have since faded away.

None seem to have outlasted their publishing glow quite as robustly as Toyota. A closer look at the company’s history and business model offers relevant insights for advancing process safety and building business resilience.

Toyota and the art of Japanese management

Around the same time In Search of Excellence was published, The Art of Japanese Management (1981) came out in an attempt to decipher the “Japanese miracle.” Toyota was one of its primary case studies.

It revealed that the American industry was not under siege because of matters like strategy, structure, and systems (the “hard” Ss), but because of inferiority in the “soft” Ss: shared values, style, and staff. These were failings in organizational capability and skills. In this eye-opening book, the co-founder of Honda Motor Company is quoted as saying “Japanese and American management is 95 percent the same and differs in all important aspects.”

Yet it wasn’t until a decade later following publication of Toyota’s story in The Machine That Changed the World (1991) and its follow-up bestseller Lean Thinking (1996) when Toyota rose to true prominence in the business world, becoming associated with the books’ concept of Lean Manufacturing (LM), which subsequently became a big business globally. Unfortunately, practitioners of LM tended to consider it synonymous with Toyota Production Systems (TPS), which it's not. While LM glosses over the soft Ss, TPS emphasizes people development for problem-solving. Yet again, the importance of human factors in business success was getting swept under the rug.

Through the turn of the 21st century, Toyota’s growth was accelerating. But in 2010, its historic reputation stumbled.

Writing for the Globe and Mail, Gordon Pitts describes how “the rapid growth that finally took Toyota to the top of the global car market, supplanting General Motors Corp. in 2008, proved to be its undoing.” This particular pursuit of growth had led to the emergence of serious quality problems for which the CEO offered an abject apology admitting that such a focus on growth, when it outstrips the rate at which people can be developed, was folly.

The focus on people development and soft skills that kept Toyota humming for so long became a lesson the company eventually had to relearn from itself to stay in the game.

Aside from the obvious statement that without people there would be nobody to run a business, the role of human capital and soft skills development has an important and nuanced impact on business resilience.

TPS veteran Teruyuki Minoura explains how the T in TPS stands for “thinking.” He describes the business model as a process of creating “an environment where people have to think [which] brings with it wisdom, and this wisdom brings with it kaizen (continuous improvement).”

Minoura’s important insight is about identifying individual employees at all levels as continual actors of the firm’s success.

Lessons for process safety from a people-driven approach to improvement

The late pioneering safety researcher Jens Rasmussen made strong arguments that in complex work environments a “drift to danger” is the stealthy unseen foe of safe operations. This dangerous drift is a result of the drive for increased efficiency in business that can starve an organization of the necessary resources to operate safely according to design intentions.

Rasmussen argued that improved risk management requires “explicit identification of the boundaries of safe operations together with efforts to make these boundaries visible to the actors and to give them an opportunity to learn to cope with these boundaries.” He described this approach as a continuous adaptive modification of behavior where the emphasis is on controlling performance in interaction with the safety boundaries rather than controlling errors.

Business leaders must form a working environment in which risk is better managed by having people actively and regularly practicing problem-solving in interaction with the boundary of safe operations. This is what Minoura might describe as a “thinking” form of risk management.

Researchers posit that the true TPS framework redefines the manager as a people coach. In order to achieve the kind of lasting success Toyota has achieved, managers need to be responsible for building performance mindsets, tracking actual performance to make problems or abnormalities visible, teaching a basic way for analyzing work, and developing employees through problem-solving and improvement tasks.

According to Steven Spear of the Harvard Business Review, this shift in understanding the role of a manager requires immersive and demanding on-boarding to alter the frame through which outsiders traditionally tend to look at management roles. He believes that “employees and managers at all levels in all functions … [should] live those principles and teach others to apply them.”

Again, this concept of active and regular learning, practice and development performed by all people in an organization is the key to resilience over time. Creating safety requires being led by the line, not outsourcing to HR.

As the history of Toyota demonstrates, even the company that became known for championing a people-first approach lost sight of the importance of human factors in the pursuit of growth and revenue. But this comes at the cost of building resilience for businesses, eroding an organization’s value in the long term.

At a time when we’re feeling the effects of volatility and uncertainty like never before, we simply can’t afford not to be putting our people first, and to always put these strategies at the forefront of our business goals and directives.

Advancing your Organization’s Resilience (OR)

With the world currently battling some of the most volatile, uncertain, complex, and ambiguous times in living memory, organizations need a clear road map for the development of OR.

Research shows how different OR themes have emerged over the decades as business models have emerged to cope with these increasing challenges. 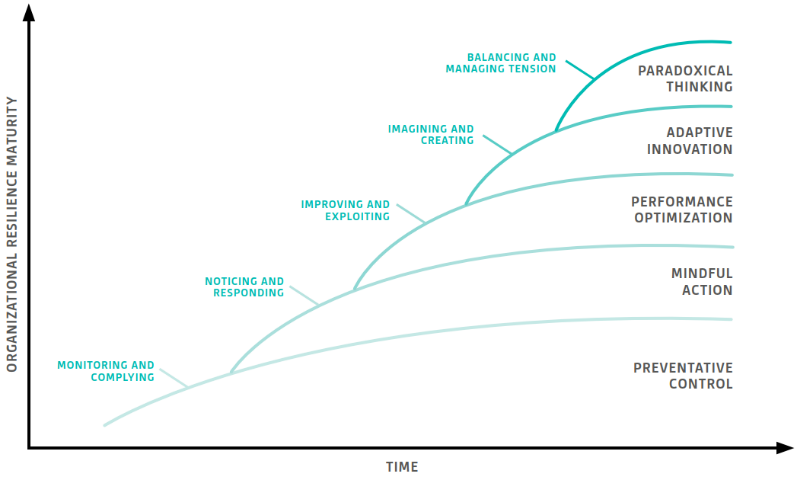 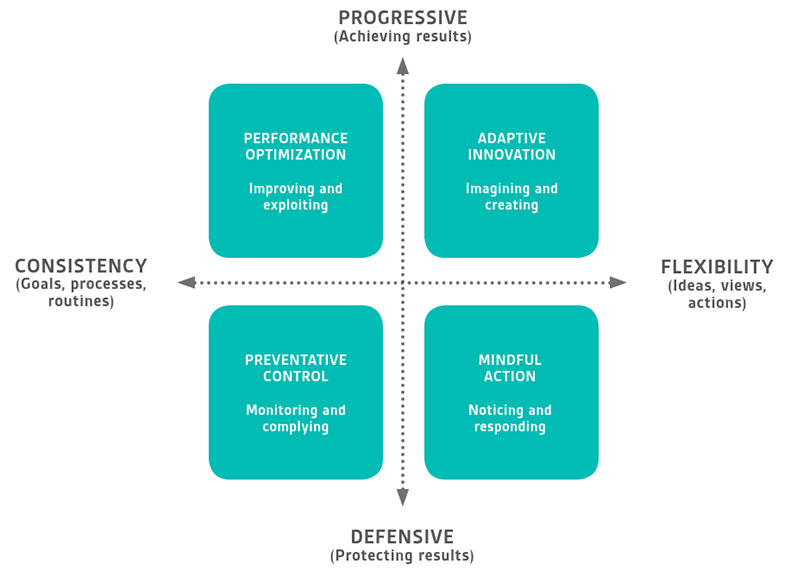 Historically, OR themes emanated from preventative control perspectives—this is where Toyota started in a post-WWII resource-starved setting. Today the company has grown to cover all four quadrants of OR approaches, including performance optimization, mindful action, and adaptive innovation.

Increasing OR maturity requires adopting these more proactive approaches, just as Toyota has done, and involving people as deeply as possible in the process. Contrary to what some safety science practitioners may say, an organization’s people are its biggest safety assets. They are the key to your organization’s long-term business resilience. Are you ready to put your people-first strategy into action? 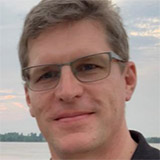