Seven ideas to help you succeed with systems integration

“Systems integration has to start before and continue during design–or eventually, you’ll end up redesigning needlessly.”

As technology evolves and more automation creeps into infrastructure, complexity increases exponentially. Take, for instance, a rail transit system made up of rail vehicles (wayside control, power, and communications equipment) and related subsystems, which have millions of lines of code. Further, a transit system is part of a regional transportation system of systems. This translates into more stakeholders and many, many more interfaces. With the plethora of interfaces rapidly changing and expanding, the probability of errors also increases. Enter the importance of successful systems integration–how do we do it? 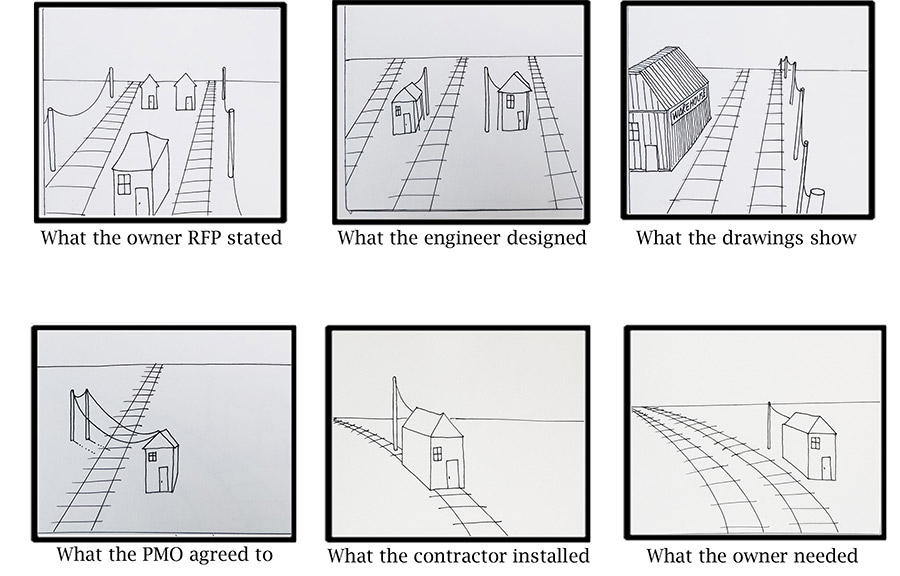 The conversation starts with clearing up the use of the word “systems” in the infrastructure and transportation industries. Successful engineering is based on clear, precise communication of ideas. Words matter. At the beginning of a project (especially a joint venture with multiple designers and contractors), it’s imperative that words are used with precision from day one–well in advance of a proposal response or statement of qualifications. This is especially critical for international teams!

For example, in the transportation infrastructure industry, systems engineering is inferred as the engineering of subsystems such as HVAC, train control, communications, or traction power. This carries a completely different meaning to what every other industry sector understands. (See ISO15288, INCOSE).

Consider the entire asset life cycle of each project, from inception to retirement, especially the maintenance and operations phase after construction is completed.

Fact: nearly 80% of system life cycle costs are determined during the preliminary design efforts. The opportunity to reduce those costs diminishes as you move along.

Infrastructure projects take years to build and are expected to operate for many decades. You’ll need to clarify the understanding of what systems engineering can accomplish by promoting the use of the phrase “systems life cycle engineering” (SLE) in place of the ambiguous phrase “systems engineering.” For example, when diagnostics for a subsystem are being discussed at concept or preliminary design reviews and that capability is traded-off in favor of cost or schedule, the operator/maintainer will suffer with that cost decision for decades and this could even cause the project to fail in the eyes of some stakeholders.

Many organizations evolve along the lines of their origin niche disciplines or via acquisitions. Over time, habits can generate a tunnel vision of people naturally reacting to their reward structure. There’s a tendency for designers to look at their own areas of expertise with extreme focus. This is necessary at times, especially when just learning a new discipline, but must not become an exclusive approach. Be aware of what the other disciplines are doing in near-real-time to avoid wasteful re-design, or worse, embarrassing construction or manufacturing errors.

A holistic view across the life cycle of an asset ensures that each discipline (stakeholder) has an integrated view of the system. Using a common tool environment, collaborative review processes, and practicing stakeholder inclusion will take you in the right direction.

4. Improve engineering reviews and include the correct stakeholders

Each role is governed by a collection of processes, both internal and external (i.e., legal, safety, QA, procurement, public relations). Diligent engineers and supervisors may catch interference or other functional issues that a neighboring discipline introduces into the whole system, but this must not be left to chance alone.

At certain points in the design and review process, each stakeholder will need their voice heard, or there is a measurable risk to the project success. Each stakeholder must feel involved and buy into the design as early as possible. This inclusion activity involves a lot of soft skills and patience.

5. Control project waste: minimize the “hidden factories” in your projects

Hidden factories consume project resources but are effectively “off the books,” meaning they represent waste and opportunity cost (see Lean Six Sigma) that can be measured by the effort required to get information over the silo walls. An example would be the interfaces between company document control systems in a typical joint venture. Lost documents, transcription errors, SharePoint navigation challenges, and needless re-design, if tracked, can be effective measures of hidden factories creating project waste.

Systems integration is the combining of various subsystems to build up a whole system. A subway line is an example of a whole system. The electrical traction power system and the rail vehicle would each be subsystems. Trying to integrate an untested electrical traction power subsystem with a new, untested subway vehicle is likely to cause failures in both subsystems! Many projects leave key integration efforts to the end–sometimes called “plug and pray” or the “big bang approach to integration.” Banging subsystems together at the end often ends poorly with too many unknowns to solve at once.

7. Integration planning: accountability by a single party is crucial

As in all processes, the integration of subsystems requires planning for success. As soon as the architecture of the system starts to take form, interfaces should be identified, described, tracked, and controlled by an accountable party. This process should begin early in the conceptual design during a bid response phase. Early activity on interface accountability also promotes cross-discipline discussions.

It’s crucial to avoid a situation where no one is accountable for a particular interface. By the very nature of an interface there are at least two parties involved. Ensure that only one party owns the accountability for each interface. Avoid shared accountability as that inevitably devolves into zero accountability (i.e., “I thought they were working on that…”).