Bridging The Gap Between Communities: The Kingston Third Crossing Preview 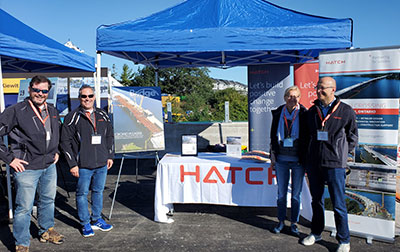 On September 24, 2022, the City of Kingston held a preview event at the Kingston Third Crossing site—which will be named Waaban Crossing upon completion—allowing the public to cross the bridge.

As part of the city’s largest infrastructure project in modern history, the City of Kingston invested in the design and construction of a 1.2-kilometer-long signature bridge over the Cataraqui River which forms part of the Rideau Canal, a United Nations Educational, Scientific, and Cultural Organization (UNESCO) World Heritage Site and Federally regulated navigable waterway. This major investment aims to provide a much-needed third connection between communities on the east and west of the Cataraqui River, improve emergency services and response, provide an alternate route for the provincial Hwy 401, relieve traffic flow, promote active and public transportation alternatives, and accommodate future growth in the region. 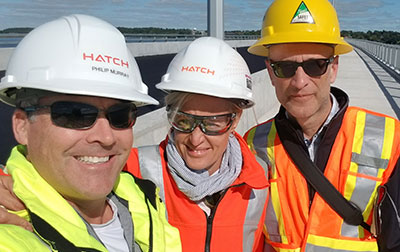 Hatch executed the design and engineering of the project, and conducted the optimization through material selection and structural analyses to generate an estimated $12 million in savings to the target cost budget. The multi-use pathway that extends across the bridge is separated by a concrete barrier from vehicular traffic, which will offer a safe alternative for those using active transportation methods such as walking or cycling.

The soft opening event was a huge success, with a gathering of over 10,000 people including the mayor, councilors, and Queen's University staff present for the “Walk, Ride & Roll – Third Crossing Preview.” Hatch was represented by Philip Murray, Global Director, Management and Delivery, Biljana Rajlic, Global Director, Highways & Bridges, Svetozar Majstorovic (Toza), Principal Engineer, Transportation, and Mark Armstrong, Director, Project Development, Environment and Sustainability. The event featured booths and presentations from community organizations such as the Kingston Coalition for Active Transportation, Kingston Police, and food vendors from the community. According to the City, the event provided an opportunity for citizens to explore the bridge ahead of its official opening later this year.

“It was important for us to be present for this major milestone in the City of Kingston. We’re proud to present the project and to have an opportunity to engage with the community we’ve been working within, and we look forward to the ways this bridge will bring the community together.” – Phillip Murray, Project Director, Hatch

The completion of the Waaban Bridge is well on its way and the bridge is set to open in December 2022.

The event received great feedback from the public and media. Here are some links to view the latest media coverage of the soft opening.