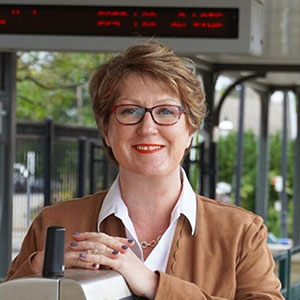 COMTO will recognize Green and 12 others, including Lifetime Achievement Award winner Dr. Christine Darden, a former NASA aerospace engineer, during a “Celebrating Women Who Move the Nation” ceremony at its virtual National Meeting and Training Conference that will be held September 28-30.

Green has worked for Hatch LTK for 25 years and is responsible for oversight of the firm’s national provision of expert consulting support on procurement of rail vehicles and systems. She was the first woman at Hatch LTK to run a national practice (Revenue Systems & Technology) and the first female vice president.

“I am honored that COMTO included me among the top women in the industry,” said Green. “When I started my career, there weren’t many women in the industry. Now, thanks in large part to organizations such as COMTO, there are women and minorities in leadership positions throughout the country.”

Darden, a Congressional Gold Medal winner, was one of the researchers featured in the book and movie, Hidden Figures, which chronicled the African American women mathematicians, engineers, and researchers whose behind-the-scenes work played a crucial role in the success of Project Mercury’s human flight program in the late 1950s and early 1960s.

The other honorees are: