Working towards a cure: Hatch raises over $1.5 million at Scotiabank Road Hockey to Conquer Cancer for the Princess Margaret Cancer Centre 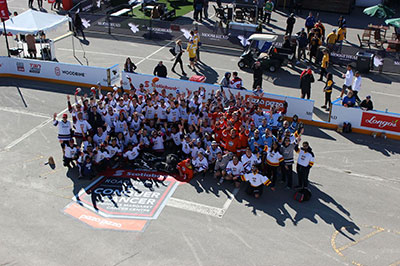 Toronto, ON—Nearly one in two Canadians will be diagnosed with cancer in their lifetime, of which one in four will die as a result of the disease. This is why, for the past seven years, Hatch employees have donated both their time and money in support of the Princess Margaret Cancer Centre, one of the top five cancer research facilities in the world.

On September 29, 2018, for the seventh consecutive year, Hatch employees, family, and friends came together to participate in Scotiabank’s Road Hockey to Conquer Cancer tournament. More than 100 players took part in 20 games, raising over $230,000. This once again earned Hatch the Corporate Challenge Cup, recognizing the company in the tournament that had raised the most funds in a given year. This brings the seven-year total to over $1.5 million raised.

Bruce MacKay, regional managing director, western North America and long-standing ambassador and honorary chair for the event shared, “I am truly amazed at what our colleagues have accomplished, not just this year but over the past seven. This absolutely reinforces my strongly held view that we hire amazing people at Hatch, that achieve amazing things.”

The Princess Margaret Cancer Centre is the largest institution of its kind in Canada, devoted 100 percent to conquering cancer. Hatch continues to support Princess Margaret in a long-standing relationship, working towards a cure.

MacKay added, “One in two. That’s an alarming rate. But unfortunately, it’s one that we need to pay close attention to. Events like Scotiabank’s Road Hockey to Conquer Cancer help us move the needle on finding a cure for this terrible disease.”