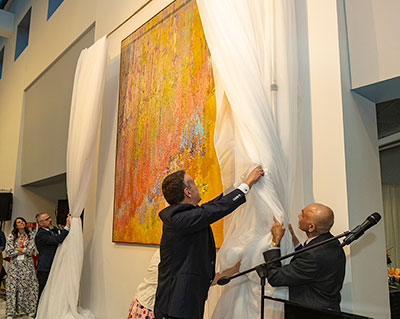 Hatch has unveiled the latest addition to the Hatch Gallery of Contemporary Art: a piece by abstract painter Larry Poons titled BUB.

Larry Poons rose to prominence in the 1960s with his Op-Art dot paintings, which were widely collected and featured in the game-changing Scull auction in 1973 alongside Op-Art dot paintings artists such as Robert Rauschenberg, Jasper Johns, Andy Warhol, Franz Kline and Frank Stella.

Poons’ painting was unveiled at an event held on April 4 at the gallery, which is hosted in Hatch’s Global Delivery Centre located in Mississauga, Ontario, Canada. The event also included a screening of The Price of Everything, a film by Nathaniel Kahn (2018). The film explores the market surrounding the contemporary art world.

The Hatch Gallery of Contemporary Art was opened in October 2017. The gallery is a reminder that to be relevant in today's world and develop great ideas that have real impact, we need to broaden our definition of what it is to be an engineer. This includes redefining our relationship with the arts. The traditional role of engineers as scientists, mathematicians, and builders is not enough to tackle the challenges of today's society. Inspiration in creating great new ideas can come from a variety of influences, including the arts.

“At Hatch, we love to tackle the world’s toughest challenges. Art has a role to play because it helps us spur our imaginations. We became engineers because we love to create, just like artists—to create something that didn’t exist before. Indeed, many renowned artists were also engineers,” said John Bianchini, Hatch’s CEO and chairman, in his address to those in attendance for the unveiling.

The gallery’s first installations were three pieces from master sculptor Abraham Anghik Ruben: Birds Talking In My Sleep, Tupilak Study III, and Dancing Bear Transformation. Ruben is a contemporary artist of Inuit descent and an Order of Canada recipient.

In August 2018, the gallery was expanded with the installation of a minerals exhibit provided by the Royal Ontario Museum, including an Amethyst, Orbicular Granite, and a Banded Iron Formation.