Partnering with Anglo Platinum to improve the lives of local communities

Seshego is the largest of a cluster of settlements situated on the outskirts of Polokwane in in the Limpopo Province of South Africa. Like many settlements in South Africa, a lack of employment opportunities is a common issue and has forced many of its residents to commute to Polokwane in search of work. Socio-Economic Development (SED) initiatives are much needed to uplift the standard of living for these communities, and improve the areas of health services, literacy, water and sanitation, roads, and education facilities. The creation of sustainable employment is critical to drive economic growth and social stability. 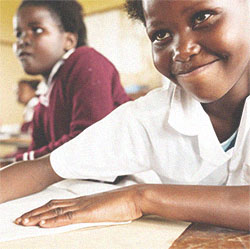 Hatch is Anglo Platinum’s engineering, procurement and construction management (ECPM) consultant for the delivery of their sulfur dioxide (SO2) abatement project at the PMC, situated near Seshego. All contractors working on this site for more than 12 months are obliged to support SED projects in the area in collaboration with the social performance team based at the PMC.

In renovating the library, Hatch wanted to ensure that they endorsed local employment, particularly the development of deserving emerging enterprises. The scope of work included waterproofing, paving, painting, upgrade of the carports, landscaping and cleaning. The project took eleven months to complete and empowered several previously disadvantaged individuals, all from the Seshego community, including seven women, twenty-three men, and twenty-five youth.

The building is more than 50 years old, and situated directly over a water channel, causing seasonal flooding, which made vehicle access difficult. The new waterproofing and paving have solved this issue. The local contractor, Ngwadibea Trading 25, created an opportunity for on-the-job experience by sharing knowledge on the steps required to prepare soil for planting or for paving, as well as waterproofing skills and paving methods. In addition, invaluable knowledge on the establishment and operation of a small business was shared, which resulted in two individuals establishing landscaping enterprises of their own, one of which is providing successful landscaping services to private homeowners in the Polokwane area.

This success is testament to the importance of training citizens to enable them to effectively contribute to the local economy. The now-active library employs seven Seshego residents, including the librarian, assistant librarians, and cleaners.

The renovation of the building was catered for in the Polokwane Municipality’s Integrated Development Plan (IDP) but was anticipated to be implemented over an extended period of time. Hatch’s involvement in this project expedited the completion of the renovations, enabling the local youth and other community members to participate in educational activities and connect with the globe in a safe and user-friendly environment much sooner than initially anticipated.

Furthermore, the library can now host educational holiday programm for local primary and high school learners, utilizing the newly paved undercover carport area. The Seshego Library is also equipped with WiFi. Abigail Chuene, senior librarian says, “It is heartwarming to see members of the community coming together to connect with friends, family, and the global world.”

Hatch supports the social and economic upliftment of the communities in which they operate and is no stranger to promoting education, making it a key objective of SED deliverables to clients.