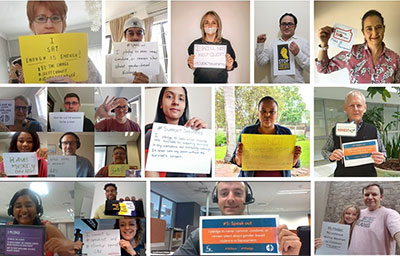 During this time, employees in our South African offices were asked to take a stand and submit a pledge against GBV to create positive change in our workplace and communities.

GBV in South Africa has been described as a “second pandemic” by South Africa's President Cyril Ramaphosa, who said “so long as this country’s women and children live in fear of violence, we cannot regard ourselves as totally free.”

Participation in the 16 Days of Activism initiative was part of Hatch's GBV campaign which officially kicked off in August, Women’s Month in South Africa. The campaign’s first initiative challenged employees to donate ZAR150 towards the Epic Foundation’s comfort pack initiative. The packs contain essential toiletry and personal care items and are given to victims of rape and abuse during the abuse reporting process.

Donations received were matched by Hatch, for a total of over ZAR20,000—providing nearly 135 comfort packs. The amount was announced to employees at an online event where Alta McMaster, co-founder of the Epic Foundation, shared her story of how she turned violence into victory.

Hatch also partnered with ICAS to conduct a survey at the beginning of the campaign to gain an understanding of current perceptions of GBV amongst employees. Following the survey, over 500 employees participated in an informative session hosted by ICAS to promote healthy gender relationships in the workplace. Additionally, leaders were encouraged to participate in a session to learn about and discuss the leadership team’s role in the fight against GBV.

Throughout the rest of the campaign, Hatch will continue to partner with local organizations and speakers to educate employees on the many facets of GBV, the triggers, and the roles played by external factors, as well as promoting healthy relationships both at work and at home.

By encouraging open dialogue and personal commitments to learning about, speaking out, and standing up against GBV, we believe that together we can make a difference.