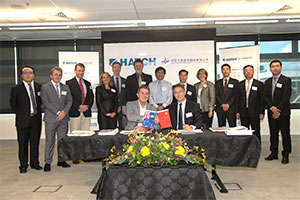 Hatch is pleased to announce a joint venture agreement with the China Communications and Construction Company (CCCC) subsidiary First Harbour Consultants, formally known as FDINE. The Hatch-FDINE joint venture agreement formalizes an existing eight year partnership and will be based in Tianjin, China. The event was commemorated by a signing ceremony at Hatch’s Brisbane office and marks a significant milestone for Hatch in the Australia-Asia region.

The agreements were signed by Hatch Regional Director of Infrastructure, David Small and CCCC FDINE Director/Deputy General Manager, Wu Jinquan.  The joint venture signifies the growing relationship between Australian and Chinese engineering firms, which will be further strengthened with the commencement of the China-Australia Free Trade Agreement.

Attending the ceremony were representatives of Austrade, Trade & Investment Queensland, Department of Foreign Affairs and Trade (DFAT) and the People’s Republic of China Consulate General. This is CCCC’s second major agreement with an Australian firm, having acquired the construction company John Holland earlier this year.

At the ceremony, CCCC Chairman Feng Zhongwu expressed his hope that this partnership will be long and successful.  Other speakers included Consul Wang Jiheng and Alison Carrington (State Director of DFAT). The speeches acknowledged the joint venture agreement as a demonstration of trust and a strong relationship already proven by the past eight years of working together.

With China’s “One Belt One Road” (OBOR) Initiative and the Asia Infrastructure Investment Bank (AIIB) providing multiple opportunities in the greater Asia region, the new Hatch–FDINE joint venture will be uniquely placed to pursue major China Inc. supported infrastructure projects across the globe.

Hatch is a global engineering and professional services firm that delivers a comprehensive array of technical and strategic services, including consulting, information technology, engineering, process development, and project and construction management to the mining, metallurgical, energy, and infrastructure sectors. Hatch has served clients for over six decades with corporate roots extending over 100 years. With over 10,000 people in over 65 offices, the firm has more than $35 billion in projects currently under management.