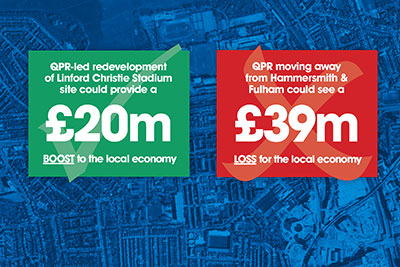 London, UK— A new Queens Park Rangers (QPR) stadium with a community athletics facility next door could deliver a £20-million boost for the local economy, according to a report by leading independent economics consultancy, Hatch Regeneris, which investigated the impact of a QPR development at the Linford Christie Stadium site.

An estimated 720 full-time jobs would be created by a larger stadium with an increased number of fans spending money in the local area on match days, as well as an increase in QPR’s supply chain spending.

The report examined the likely increase in the Club’s role as a local employer, a purchaser of goods and services, a community asset, and a generator of wider benefits, in addition to a temporary boost from construction activity.

QPR’s current economic value to the local area is estimated at £39 million a year, which would be lost if the Club were to move out of the London Borough of Hammersmith and Fulham.

The study was commissioned by QPR after suggestions from fans and local residents to quantify the Club’s economic and social benefit to W12.

QPR’s vision is for a new stadium that is not just a home for the Club but a hub for the community. The Club hopes to bring jobs and regeneration to W12, to reinvigorate community sports facilities, and to encourage more people to enjoy the cherished green open space of Wormwood Scrubs.

A new home on the Linford Christie Stadium site could be the Club’s last chance to build a sustainable long-term future in the area that has been its home for a hundred years. It is also an opportunity to promote physical activity and improve the health and well-being of West Londoners by creating an innovative community sports hub with a professional football club at its heart.

The proposed community stadium would stick to the existing Linford Christie Stadium site and not encroach on the green open space of Wormwood Scrubs.

A spokesman for Hammersmith & Fulham council said in August, “Linford Christie Stadium is a vital community asset in an open green space. We want to protect and enhance its use for athletics and recreation for the long-term benefit of residents. Due to severe budget pressures, our subsidy for the stadium in its current form is unsustainable. We have asked a master plan architect to draw up options for the stadium site, which will be presented this year to the Wormwood Scrubs Charitable Trust for their final decision. We continue to talk a number of stakeholders, including QPR, as part of this process."

Darren Wisher, managing director with Hatch Regeneris stated: “We worked through various scenarios to understand the social and economic impact QPR brings to West London; this included the impact of the Club moving out of the W12 postcode, the construction of a new stadium, and the redevelopment of the Loftus Road Stadium site as a residential-led scheme. Our report suggests that should the new stadium be built, there would be an increase in local employment both on a permanent basis and on match-day, a significant boost in London-based supply chain spending, and investment in housing stock and community assets, resulting in an additional £20 million spend in the local economy. Conversely there would be a loss of £39 million to the area should QPR leave Loftus Road.”

Whatever our clients envision, our engineers can design and build. With over six decades of business and technical experience in the mining, energy, and infrastructure sectors, we know your business and understand that your challenges are changing rapidly. We respond quickly with solutions that are smarter, more efficient and innovative. We draw upon our 9,000 staff with experience in over 150 countries to challenge the status quo and create positive change for our clients, our employees, and the communities we serve.

Find out more on www.hatchregeneris.com.